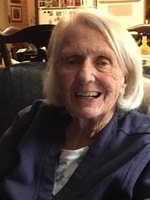 On December 11, 2020, the world lost one of its greats. Alice Jean (nee Maynard) Myron died peacefully in her sleep under the care of Hospice. Alzheimer’s stole her memory, made the world confusing, and often left her cantankerous and mischievous, but those bright blue eyes and quick wit remained to the end. In the final years, Alice was often heard asking “when are we going home?” Alice, you are finally home and for that, we are grateful.

Alice was born to Russel and Helen Maynard on March 20, 1932, on the family farm in Blaine, MI. During World War II the family moved to Brimley, MI while her father worked on the construction of the MacArthur Lock at Sault Ste. Marie, MI. After the lock was completed, the family moved to Port Huron. Russ and Helen opened Maynard Packing Company, a meat processing plant that expanded to include two retail stores: a North and South location. The business was a family endeavor and everyone pitched in. Alice worked in the family business as a teenager and during summer vacations from college.

Alice graduated from Albion with a BA in Education. In 1954, Alice married her high school sweetheart, Harry Miller Myron. They lived in Ann Arbor while Harry finished his degree at the University of Michigan, moved to Detroit and then returned to Port Huron to live and raise their family. In 1982, Alice earned her Master’s degree from Wayne State. After a full day of teaching, Alice came home and graded papers, cared for her ailing mother, and prepared dinner for her family. She then sat down at the typewriter and completed her assignments.

Alice spent most of her teaching career with Port Huron Area School District. Her early career was spent teaching at Garfield Elementary/Middle School and then as an opening staff member of Holland Woods. Many of her colleagues became dear friends. Alice retired in 1996 after 30+ years of teaching. Alice taught thousands of children to read, championed every child and, to this day, we meet people who share their love of reading because of Mrs. Myron.

Alice and Harry’s life together was never dull. In 1968, Harry and Alice (along with Fred and Marcia Haynes) purchased a summer home on Mackinac Island, MI. In the summer of 1969, Alice and Harry packed Susan, Michael, and Patrick into their Ford Country Squire and headed north. With the three kids in tow, Fuzzywig their Old English Sheepdog, Patrick’s Big Wheel, and a TV so they could watch the moon landing, the Myrons arrived on the island. The cottagers on the East Bluff had not seen anything quite like it. Alice and Harry quickly fell in love with the island and its community. In addition to hosting family members and guests at the cottage, Alice also: organized weekly meals at Trinity Church for summer workers; acted as the Docent Coordinator at the Governor’s Mansion for several seasons; was a board member of Mackinac Associate; was President of the Mackinac Island Cottagers’ Association for a term; was a member of the Mackinac Island Needle Guild (MING) and the East Bluff NLU club; belonged to the Mackinac Island Yacht Club; helped with the Medical Center’s annual auction; and did so much more. Friends of the Round Island Lighthouse (the group that spearheaded the first restoration of the lighthouse) was born on the Mackinac home’s front porch. In 2019, Alice, family and many friends gathered to celebrate an amazing 50 summers on Mackinac.

Alice and Harry were equally invested in their Port Huron community. While working and raising family, Alice was a dedicated member of the Bluewater Garden Club and Grace Episcopal Church. Alice and Harry enjoyed the Terpsichorean Dance Club and Friday nights with the Palmer Court or Shanty Crew. Alice and Harry had a joyful marriage that lasted 46 years until his passing in 2000.

Family and friends were vitally important to Alice and she loved each one fully. Above all, Alice cherished spending time with her grandchildren, Kelly, Andrea, and Ruby and great-grandchildren, Kanye and Aidyn. Alice had the best of friends, many of which dated back to high school and her earliest days on Mackinac. Late in life, Alice’s daughter, Susan, became her constant companion and caregiver. Alice lived at home until October 2020, when she moved into MediLodge of Port Huron.

Alzheimer’s is a cruel disease, but it does not erase the 80+ years of an otherwise extraordinary life. Alice Jean Myron was an amazing human. She was wise, feisty, kind, stubborn, determined, pragmatic, generous and a two time cancer survivor. She had a quick wit, solid moral compass and gave the best advice (but only when asked to do so), always without judgement.

We will forever adore and remember Alice. We stand taller and stronger because of her. Now, Alice watches over us – and we are better for knowing her.

Special thanks to the staff at MediLodge of Port Huron and McLaren Hospice. The family suggests memorial contributions be directed to the Harry Myron Fund with the Mackinac Island Community Foundation (micf.org), the Dementia Alzheimer’s Resource Committee (darcscc.org) of Port Huron, Grace Episcopal Church Port Huron, Trinity Episcopal Church Mackinac Island, or an education-based charity of your choosing.

A memorial will be held at a later date. We look forward to the time when we can gather to celebrate a life well-lived and share our memories of Alice.