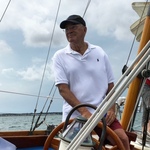 World traveler and entrepreneur, Allen Stevens’ love of adventure did not come to an end with his death. Allen passed away suddenly on January 10, 2021, at the age of 77. His children, Sarah (Sam) and Spencer, as well as his beloved, Candia, and other family and friends will continue to honor his legacy in travel, adventure and business.

Allen Lorne Stevens, born in Port Huron, MI on August 23, 1943 was the son of the late Lois and Allen B. Stevens. Growing up along the St. Clair River with his brothers, LeRoy and Robert, and many friends, the adventurous spirit was unavoidable. Allen graduated from the University of Michigan School of Engineering and Harvard Law School.

Allen’s fascination with container shipping led him into his early career with Sea-Land Services, and continued throughout his time working with Malcom McLean and McLean Industries. Stevens Industries and his many ventures over the years expanded on his love of transportation and travel, as he invested not only in ships, but also trains, buildings and hotels. Allen was a Founding Partner of both Club Quarters, developing 18 hotels across two continents, and Bluewater View, a first of its kind luxury condominium development overlooking the St. Clair River in his hometown of Port Huron. Bluewater View was particularly close to his heart because he was working in partnership with his son Spencer and the building was designed by his brother Lee. Allen also enjoyed his Directorship with Subsea 7, a subsea engineering, construction and services company.

When not building ships, hotels and buildings, Allen’s first true love was his family. Allen married Jane Ann Muschamp, and together they had two children, Sarah and Spencer. Allen is preceded in death by Jane in January 2012. For the past several years, Allen was fortunate to find Candia Fisher, who shared his love of travel and adventure. Allen also gained a son-in-law in Sarah’s husband, Sam Hoyle.

As an avid traveler, Allen crisscrossed the globe using all forms of transportation, and was especially fond of train trips. Most recently, he was fortunate to join friends on a spectacular rail trip across the Canadian Rockies from Calgary to Vancouver in historic Canadian Pacific rail cars. Spending time with his family and trains at his Michigan cottage at White Rock, escaping the cold to Florida, and exploring Martha’s Vineyard brought endless joy.

Allen is survived by his children Sarah (Sam) Hoyle and Spencer Stevens, his significant other Candia Fisher and her children Madeline Fisher and Eric Schulman, his brothers LeRoy (Brenda) Stevens and Robert Stevens, five nieces and nephews, many cousins, and friends. A family burial at Lakeside Cemetery has taken place, and a Celebration of Allen’s life will be planned for later this summer when it is safe to gather in person. Memorial contributions may be made to the Allen L. Stevens Fund at the Community Foundation of St. Clair County, to the Intrepid Fallen Heroes Fund, or to an organization of your choice.