To share your memory on the wall of Barbara Pennell, sign in using one of the following options:

Print
Barbara Theresa Pennell, 77, of Port Huron Township, passed away on Monday, July 27, 2020, at her home surrounded by her family.

Barbara was born on April 6, 1943, in Marine City, daughter of the late Francis and Theresa (Jolin) Thomas.... Read More
Barbara Theresa Pennell, 77, of Port Huron Township, passed away on Monday, July 27, 2020, at her home surrounded by her family.

Barbara was born on April 6, 1943, in Marine City, daughter of the late Francis and Theresa (Jolin) Thomas.

Barb worked for 18 years at Riverside Metals and also Collins and Aikmen as a press operator. She loved gambling, traveling, keeping her yard beautiful, and her numerous pets she has had over the years. She was the most selfless person who gave all she had to care for her children and granddaughter. She bought her first brand new car in 2016, was very proud, and named it “Zippy”. She loved watching Wheel of Fortune and was looking forward to her soon to be born great-granddaughter, Kennedy.

Barb is preceded in death by her sisters, Mary Krauss and Ann Boden; and her brothers, John Thomas, Jerry Thomas, and Fred Thomas.

Interment and graveside services will be held at 10:00 a.m. on Tuesday, August 18, 2020, at Woodland Cemetery in Port Huron Township. Arrangements were entrusted to Smith Family Funeral Home of Port Huron.
Read Less

To send flowers to the family or plant a tree in memory of Barbara Theresa Pennell (Thomas), please visit our Heartfelt Sympathies Store.

Receive notifications about information and event scheduling for Barbara

We encourage you to share your most beloved memories of Barbara here, so that the family and other loved ones can always see it. You can upload cherished photographs, or share your favorite stories, and can even comment on those shared by others.

Posted Jul 27, 2020 at 10:06pm
Aunt Barb was such an amazing aunt. She’s in every memory of mine. Her house was my second home when I was at my grandparents. I’d walk through the woods and the sandpit just to go hang out. She never turned me away and always gave me an open invitation to her house. My place to stay was always ready for me whenever I visited. She made me pot roast and chicken noodle soup. She was an amazing cook. We’d gamble over in Canada and then we’d go have fish and chips at the wharf. It was our special time together. I loved her so much. Ron, Angie, thank you for sharing your mom with me. I love you all so much
Comment Share
Share via:
M 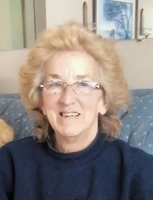