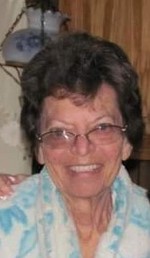 79, of Kimball Township, passed away on Wednesday, April 15, 2020, in the comfort of her home surrounded by her children.

She was born in Port Huron, Michigan on July 18, 1940, daughter of the late Truman and Gertrude (Weston) Hall.

Joan graduated from Port Huron High School and was the owner of Chippewa Embroidery. She liked bowling, golfing, hunting, and making crafts. She was a fan of the Detroit Red Wings and the Detroit Tigers, but most importantly, Joan loved spending time with her grandchildren and great-grandchildren.

She was preceded in death by her parents; husband, Robert West; and brother, Kenneth Rex Haddix.

Due to the restrictions on social gatherings at this time, a memorial service will be held at a later date. Interment took place at Woodland Cemetery. Arrangements were provided by Smith Family Funeral Home of Port Huron.

Memorials are suggested to the American Cancer Society or "Wishes of the Family."