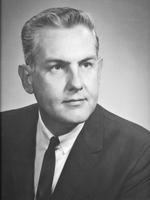 He was born on March 11, 1928 in Brooklyn, New York to Francusco “Frank” and Mary (Kelly) Pinto. Charlie and his family moved to Detroit in 1942 when he was 14 years old. He is a graduate of Detroit Denby High School and Wayne State University where he earned degrees in Education, School Administration, and Law. He is an army veteran, having served in Korea.

Charlie met and married his wife Trudy, the love of his life, in 1954 while both were teachers at Goodale School in Detroit. He began his law career as Livonia’s City Attorney from 1956-1963. He spent the next 29 years as an attorney for General Motors. Over the years, he also served on the Livonia City Council and Zoning boards.

Above all, Charlie loved his family and adored his grandchildren, Mike and Jake. His greatest pleasure was in watching them persevere and achieve their dreams. He closely followed Wolverine, Spartan, and Boilermaker sports.

He is preceded in death by his wife, Trudy, and brother, Frank. He is survived by daughters, Martha (Mary Timmons) Pinto of Massachusetts and Mary Jo (Al) Spencer of Fort Gratiot, and grandchildren Michael and Jakelyn Spencer.