To share your memory on the wall of Christine Youngblood, sign in using one of the following options:

Long time Port Huron resident Christine Youngblood passed away peacefully on Monday, March 16, 2020. Her son Andrew, daughter-in-law Catherine and dear friend Kamelle Palazola were by her side. She was 85 years old.

She spent her early childhood in Bay Port and moved to Port Huron in her teens. Christine graduated from Mercy College of Detroit and worked as a registered nurse for 50 years. Christine married Norbert Vincent Youngblood in 1956 at St. Joseph Church here in Port Huron. Because of her husband’s career as an Officer in the United States Navy, Christine frequently moved but eventually settled in San Pedro, California in 1970. She returned to Port Huron in 1983 and has lived here ever since. After retirement, Christine volunteered her time with the Red Cross and People’s Clinic. In 2013, the City of Port Huron bestowed on her the Spirit of Port Huron Brotherhood Award for service to her community. Christine was a parishioner at St. Mary Catholic Church.

She was preceded in death by her husband, Norbert and her son, John.

Interment and graveside services were held privately at Assumption Grotto Catholic Cemetery in Detroit. A memorial mass will be held in the future at St. Mary Catholic Church in Port Huron.

In lieu of flowers, memorials are suggested to the Peoples Clinic for Better Health (mylakehuron.com).
Read Less

To send flowers to the family or plant a tree in memory of Christine Youngblood, please visit our Heartfelt Sympathies Store.

Receive notifications about information and event scheduling for Christine

There are no events scheduled. You can still show your support by sending flowers directly to the family, or planting a memorial tree in memory of Christine Youngblood.
Visit the Heartfelt Sympathies Store

We encourage you to share your most beloved memories of Christine here, so that the family and other loved ones can always see it. You can upload cherished photographs, or share your favorite stories, and can even comment on those shared by others.

Posted Mar 19, 2020 at 09:24pm
I was very saddened by the loss of Aunt Chris. Though I haven't seen Aunt Chris for several years, I do have fond memories of her. The funniest was when she took the too off her RV. It was extremely funny. She also gave her mother a great 80th birthday party. To all my cousins my heart is saddened for you and I pray for you and your family. God bless!
Andrea Granzow-Simon
Comment Share
Share via:
JM

Posted Mar 19, 2020 at 07:11pm
We send our thoughts, prayers, and heartfelt condolences on the loss of your mother, Christine.
John McIntosh
Katrin Eismann
Comment Share
Share via: 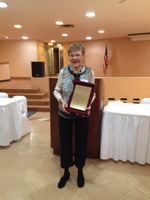