To share your memory on the wall of Eunice Lepa, sign in using one of the following options:

She was born to Cecil and Bessie (Young) Brabant on January 1, 1932, in Cedarville, Michigan.

She was born to Cecil and Bessie (Young) Brabant on January 1, 1932, in Cedarville, Michigan.

Eunice grew up in Deckerville and graduated from Deckerville High School. Eunice and Stanley lived at Sheldon Beach in Burtchville Township for many years where they owned and operated the Lakeshore Drive-In Theater. They later moved to Fort Gratiot Township their summers were spent, and they wintered for six months each year in Sand Key near Clearwater Beach, Florida. Eunice and Stanley enjoyed traveling the country and visited all fifty states. Eunice was a wonderful and loving mother and grandmother to her family.

Eunice was preceded in death by her grandson, Daniel Lepa-McGraw; brother-in-law, George Kalbfleisch; and her aunt, Violet Parrott.

A funeral service will be held on Wednesday, August 19, 2020, at 1:00 p.m. with a visitation beginning at 12:00 p.m. at Smith Family Funeral Home-Hancock Street. Reverend Max Amstutz will officiate. Graveside services and interment will follow at Mt. Hope Catholic Cemetery in Port Huron.

To send flowers to the family or plant a tree in memory of Eunice Faye Lepa (Brabant), please visit our Heartfelt Sympathies Store.

Receive notifications about information and event scheduling for Eunice

We encourage you to share your most beloved memories of Eunice here, so that the family and other loved ones can always see it. You can upload cherished photographs, or share your favorite stories, and can even comment on those shared by others.

Posted Aug 18, 2020 at 08:12am
I remember working at the concession stand for Eunice and Stan when they owned the Lakeshore Drive-In. They were my first employers and I learned a lot from them. Our prayers are with the families of Eunice. 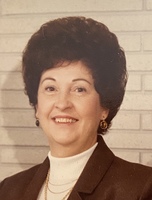