To share your memory on the wall of Frank Prapotnik, sign in using one of the following options:

He was born in Detroit, Michigan on October 5, 1934, son of the late John and Adella (Mag... Read More
Frank Elias Prapotnik

He was born in Detroit, Michigan on October 5, 1934, son of the late John and Adella (Magulac) Prapotnik.

Frank attended Richmond High School and graduated with the class of 1953. He worked as a Union Baker, a Security Guard, and a Porter for 31 years at the Brass Rail. Frank was an avid coin collector who also enjoyed making toy soldiers and going for a drive.

A visitation will be held on Thursday, July 9, 2020, from 2:00 p.m. to 4:00 p.m. at Smith Family Funeral Home-Hancock Street. A funeral service will begin at 4:00 p.m. Interment will take place at Evergreen Cemetery in Detroit.

To send flowers to the family or plant a tree in memory of Frank Elias Prapotnik, please visit our Heartfelt Sympathies Store.

Receive notifications about information and event scheduling for Frank

There are no events scheduled. You can still show your support by sending flowers directly to the family, or planting a memorial tree in memory of Frank Elias Prapotnik.
Visit the Heartfelt Sympathies Store

We encourage you to share your most beloved memories of Frank here, so that the family and other loved ones can always see it. You can upload cherished photographs, or share your favorite stories, and can even comment on those shared by others.

Posted Jul 07, 2020 at 10:21am
My deepest condolences to his family. Frank was the best neighbor I could of ever asked for. I lived next to him for 10 years on Michigan st, he welcomed me to the neighborhood and was as sad as I when I had to leave. I will always have fond memories of sitting on his porch talking, taking him to the bank and how he always made sure that when his grass was cut or snow removed that mine was done too. RIP Frank, you will be missed. Dawn Burgett
Comment Share
Share via:
H

Posted Jul 07, 2020 at 10:18am
I went to school with Frank, Class of 53. When we started our class reunions, Frank never came. I called him and said he would really enjoy himself if he came. Finally, after much coaxing he did. He thoroughly enjoyed himself and attended the next one also, our 50th. We were so happy that he joined us. Since then, when he was out on one of his “rides, he would stop in and visit. We always enjoyed his visits and will miss him. Rest In Peace my friend. Helen Okalski
Comment Share
Share via: 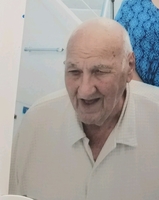