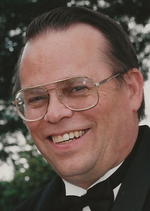 Jerry graduated from Michigan State University and was an avid Spartan Fan! He was a Vietnam Vet who served in the army. Jerry loved being on the lake. He enjoyed traveling and going on many tropical cruises. Jerry was once the president of The Kiwanis Club of Port Huron and an enthusiastic participant in the annual Polar Bear Plunge. He was the owner of The Ben Franklin for 30 years, as well as Party Magic, which he was very proud of. He then went on to own Frames for Less after the Ben Franklin store was closed.

Preceding Jerry in death is his dad, Ross Jerrett and several aunts, uncles, and cousins .

A private family visitation has taken place. A memorial will take place at a later date. Arrangements are by Smith Family Funeral Home in Port Huron.