To share your memory on the wall of James Elliott, sign in using one of the following options:

Your condolence has been submitted for approval. There may be a delay before posting.

J.R. served in the United States Marine Corps. From 1959 to 1965. J.R. worked for the Grand Trunk Rail Road. He was a fireman and EMT in Port Huron. He was a construction worker. He was a Power Engineer at Dunn Paper for 33 years.

J.R. retired in 2004 and moved to Crossville, Tennessee, where he started building houses. J.R. was a foster parent to many children here in Port Huron and Tennessee. J.R. volunteered at the VFW post 796. He was a member at the VFW post 796 and the American Legion in Port Huron for many years. J. R. worked with young Marines in Tennessee and on the Policy Council for the Head Start Program in Crossville, Tennessee.

He was preceded in death by his parents, Franklin and Theresa Elliott; and his brother, Frank Elliott.

Interment to follow at a later date at Holly Cemetery.

To send flowers to the family or plant a tree in memory of James Raymond Elliott, please visit our Heartfelt Sympathies Store.

Receive notifications about information and event scheduling for James

There are no events scheduled. You can still show your support by sending flowers directly to the family, or planting a memorial tree in memory of James Raymond Elliott.
Visit the Heartfelt Sympathies Store

We encourage you to share your most beloved memories of James here, so that the family and other loved ones can always see it. You can upload cherished photographs, or share your favorite stories, and can even comment on those shared by others. 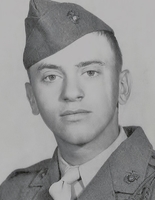