To share your memory on the wall of James Wedge, sign in using one of the following options:

Born on September 29, 1934, Jim was raised in Port Huron, where he worked his first job at Smith’s Market, and remembered stopping at Armbruster’s for fresh French fries before going to the movies with friends. He also visited the London Dairy, where he met Lois Russel. He joined the Navy in 1953, and couldn’t stop thinking of Lois, so he asked his father to go to see her. Lois was surprised when Earl Wedge turned up on her doorstep with a proposal from Jim and an engagement ring to seal the deal! They were married on October 22, 1955. Jim completed his military service in the Seabees, stationed in Barbados and Newfoundland, before returning to the US in 1957 to start a family.

Jim and Lois had two children, a daughter, Kimberlee, and a son, Timothy James. A lifelong athlete, Jim loved playing baseball and softball, and was a devoted supporter of sports in his community. He liked to watch Kim and Tim participate in athletics, and brought the same enthusiasm to watching his grandchildren and great-grandchildren play. He served on the Marysville Recreation Commission for over 30 years. Volunteering at McMorran Ice Arena led to over 50 years as an off-ice official for Port Huron Minor Hockey.

When he retired after a long career in inventory management, Jim enjoyed eating breakfast at local restaurants, beginning with the Four Star in Marysville, then Theo’s in Port Huron, and most recently at Country Kitchen in Kimball. After breakfast, he drove to the river to watch the boats. He was sorry that current restrictions kept him from enjoying this ritual in recent months.

Jim was preceded in death by his wife, Lois, and his daughter, Kim. He is survived by his son Timothy (Christine), son-in-law Richard Trembath, and grandchildren Stacey (Will) Casey, Jamie (Jenni) Trembath, Parker Wedge, Ellie Wedge and Greta Wedge, and great-grandchildren Jaxson Trembath, Logan Casey, Jameson Trembath and Jase Trembath. His sisters-in-law Pat Amon, Nancy VanCamp, and Sheila Morrison also survive him, along with numerous cousins, nieces, nephews and friends.

Due to current restrictions related to COVID19, a memorial will be planned for later this summer. Details will be published when restrictions are lifted.

To send flowers to the family or plant a tree in memory of James Arthur Wedge, please visit our Heartfelt Sympathies Store.

Receive notifications about information and event scheduling for James

There are no events scheduled. You can still show your support by sending flowers directly to the family, or planting a memorial tree in memory of James Arthur Wedge.
Visit the Heartfelt Sympathies Store

We encourage you to share your most beloved memories of James here, so that the family and other loved ones can always see it. You can upload cherished photographs, or share your favorite stories, and can even comment on those shared by others.

Posted May 31, 2020 at 02:06pm
So many memories of camping with your Mom and Dad you and Kim. So sorry for your lost Tim. Prayers for you and your family. Sharon Bickley
Comment Share
Share via: 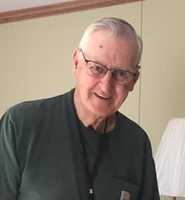