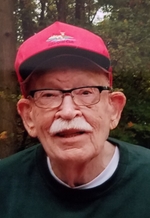 He was born in Detroit, Michigan on October 19, 1927, the son of Emil Cyril Martens and Elizabeth Clarke Martens. He married Jeanne Cudlip on October 1, 1971 in Port Huron, Michigan.

John was an agent with State Farm Insurance and retired from the company after 40 years of service. He was actively involved in theater where he enjoyed both acting and directing. John was a member of the Port Huron First United Methodist Church and was a part of the Men's Club and Choir. He loved playing golf, woodworking, and he enjoyed spending quality time with his family, especially with his many grandchildren and great-grandchildren.