To share your memory on the wall of Kathryn Wilks, sign in using one of the following options:

Kathryn graduated from Port Huron Northern High School and continued her education at St. Clair County Community College where she graduated as a Licensed Practical Nurse. She was a manager at Kentucky Fried Chicken before working as an LPN at Children’s Health Care for over 20 years. She was a parishoner of St. Edward on the Lake Catholic Church.

Preceding Kathryn in death is her father, Robert Steward.

Memorial are suggested to “Wishes of the Family."

To send flowers to the family or plant a tree in memory of Kathryn Ann Wilks (Steward), please visit our Heartfelt Sympathies Store.

Receive notifications about information and event scheduling for Kathryn

We encourage you to share your most beloved memories of Kathryn here, so that the family and other loved ones can always see it. You can upload cherished photographs, or share your favorite stories, and can even comment on those shared by others.

Posted Jun 10, 2020 at 02:00pm
I always remember seeing Kathy with her husband and mom at church - faithfully! Always smiling, she helped with as many activities as she could and would say "I am sorry I can't do more!" She will be greatly missed by her St Edward family:(
Comment Share
Share via:
JK

Lynn purchased the Love's Tapestry and planted a memorial tree for the family of Kathryn Wilks. Send Flowers 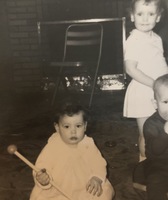