To share your memory on the wall of Lawrence Fredendall, sign in using one of the following options:

They wrote letters and sent telegrams during the war, but when Dean returned in 1946, they had a weekend focused courtship as they traveled between Port Huron and Mt. Clemens. On May 14, 1947 Eileen and Dean married at St. Stephen Church and resided in Port Huron until his death.

Dean (Larry to his many friends) worked and went to Port Huron Junior College where he graduated in 1949. From then his career took many turns, from working and managing in factories, selling insurance, to owning small restaurants. In the mid-1970’s he bought Serve-All Appliance Parts & Repair and operated that business until selling it to his son David.

Dean was a caring, giving person who was always helping someone. He was a caring, humble man always focused on helping others. Whether it was bringing home a homeless person for a meal, making sure an older living alone neighbor had a hot meal or working through a non-profit to help the greater community he was “paying it forward.” He was honored many times for his work, but that is not why he gave back. Something within him was rewarded by assisting people. His legacy lives on via the St. Vincent DePaul Society and the Blue Water Community Food Depot. He enjoyed his golf and was a member of the Elks. He was also a member of the VFW and the American Legion. Eileen and Dean are founding members of St. Mary Catholic Parish in Port Huron.

As demonstrated by his large family, Dean loved people. He especially loved his babies and enjoyed those great grandbabies right up to the end of his life. As recently noted in a family conversation, “Grandpa loves his family, he loves his babies, he just loves.” He knew how to calm down any child that came into his house with a bit of rocking and singing.

He was preceded in death by an infant son Eric; his parents; brothers Verdun (Fritz), Donald and LeRoy Fredendall; and sisters Esther Revoir and Joyce Emlaw; and granddaughter Maylissa.

Memorial contributions in his memory are welcomed. Dean would especially appreciate contributions to the St. Vincent DePaul Society or to the Blue Water Community Food Depot.

To send flowers to the family or plant a tree in memory of Lawrence D. Fredendall, please visit our Heartfelt Sympathies Store.

Receive notifications about information and event scheduling for Lawrence

We encourage you to share your most beloved memories of Lawrence here, so that the family and other loved ones can always see it. You can upload cherished photographs, or share your favorite stories, and can even comment on those shared by others.

The Slanec Family and David Fredendall sent flowers to the family of Lawrence D. Fredendall.
Show you care by sending flowers

Posted Sep 25, 2020 at 08:10pm
Dave wish we could be there for you & please know you are in our thoughts & prayers.We miss you &may your Father be at peace . LoveJeff&KathDionne

Posted Sep 25, 2020 at 11:58am
In loving tribute to a great man, who kept the world free, and helped triumph goodness. He is reunited now with the rest. -The family of Ed Donnellon

Posted Sep 25, 2020 at 11:24am
Marie, Dan, and family,
We are thinking about you and your family. We send our condolences and love.
Jan Shanahan & Pat McKane
Comment Share
Share via:
TF

The Slanec Family purchased flowers and planted a memorial tree for the family of Lawrence Fredendall. Send Flowers

Posted Sep 25, 2020 at 08:23am
Dan, Martha - So sorry for your loss; you and your family are in our thoughts and prayers. Greg Kacvinsky and Kris Harrison

Flowers were purchased for the family of Lawrence Fredendall. Send Flowers 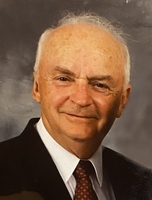