To share your memory on the wall of Lawrence Smith, sign in using one of the following options:

Print
74, of Fort Gratiot, passed away very unexpectedly on Saturday, March 14, 2020, in Rocky Mount, North Carolina surrounded by his family.

He was born in Port Huron, Michigan on June 9, 1945, son of the late Charles and Marian (Cook) Smith... Read More
74, of Fort Gratiot, passed away very unexpectedly on Saturday, March 14, 2020, in Rocky Mount, North Carolina surrounded by his family.

He was born in Port Huron, Michigan on June 9, 1945, son of the late Charles and Marian (Cook) Smith.

Larry was a very dedicated longtime member of Grace Episcopal Church in Port Huron. He stayed busy in his “spare” time golfing, traveling, boating, and most importantly spending time with his family and grandchildren. Larry had a love for hockey and leaves behind his beloved hockey family. He was a very generous man, always giving his time for the betterment of the community. Larry attended St. Clair County Community College and was an admired instructor in sales and marketing. Larry was the former Vice President and General Manager for RadioFirst for 44 years before his retirement in 2014. He oversaw the operation of radio stations WPHM, WHLS, WHLX, WBTI, and WSAQ. Before that, he was a manager at Wismer Broadcasting of Port Huron.

He was responsible for starting the CAPTURE program, Community Roof Sit, and a fundraiser involving WSAQ and the St. Clair County Child Abuse and Neglect Council. Larry was also a member of the Michigan Association of Broadcasters board of directors and served as chair of the Port Huron Hospital Foundation board of directors.

He was preceded in death by his sister-in-law, Deborah Sari; brother-in-law, Pat Cox; and his mother and father-in-law, Catherine and Robert Smith.

Larry has touched countless lives of people in our town, many of whom would like to pay their respects. Due to the restrictions on events, Larry's funeral service will be private for his family on Friday, March 20, 2020, at 6:00 p.m. Smith Family Funeral Home will be live streaming his funeral service to the obituary page for Lawrence Smith on our website and also broadcasting live on WPHM 1380. Interment and graveside services will take place at Lakeside Cemetery on Saturday, March 21, 2020, at 10:00 a.m. A celebration of Larry's life will be held in the future at Grace Episcopal Church.

To send flowers to the family or plant a tree in memory of Lawrence Charles "Larry" Smith, please visit our Heartfelt Sympathies Store.

Receive notifications about information and event scheduling for Lawrence

We encourage you to share your most beloved memories of Lawrence here, so that the family and other loved ones can always see it. You can upload cherished photographs, or share your favorite stories, and can even comment on those shared by others.

Craig and Lee Bowman, B, Erica, Jess, Donna and Ron (Coulter), and other have sent flowers to the family of Lawrence Charles "Larry" Smith.
Show you care by sending flowers

Posted Mar 21, 2020 at 07:10pm
Cousin Larry was a man of great heart and spirit. No matter how much time passed between our visits, his warm welcome, kindness and humor were a constant, like coming home. Now all the many Smith relatives who have gone before him are welcoming him Home with open arms and tremendous pride.

I know the love and light that Larry generously shared was due to the blessings of his dear wife Kathy, his cherished family, his strong faith and many friends. So thank you for loving him so deeply and bringing such happiness to his life…it was wonderful life.
I only wish it had been longer.

Posted Mar 21, 2020 at 12:23pm
There will never be another like him. friend to Port Huron Hospital Foundation, man of ideas, sincere, kind, funny, integrity... will never forget him. Port Huron will never be the same. So sorry for this huge loss in your life. Will be praying for you. Nan Klemmer
Comment Share
Share via:
JG

Posted Mar 21, 2020 at 10:22am
I was so sorry to hear about Larry. His infectious good humor, smile & ever present tan always lifted my spirits. His commitment to our community, especially the children in the neglect/abuse system has (and will continue to have) long lasting effects. Thought and prayers for you Kathy and the family. Juanita Gittings
Comment Share
Share via:
EL

Posted Mar 20, 2020 at 10:10pm
Kathy, Lo, and family... We are so very sorry about Larry's passing. He was such a wonderful man who will continue living on through all of you and through everyone he has inspired. We will definitely miss seeing him in Lexington in the summertime. We know how you all had so much fun and created so many cherished memories there together, plus countless others. Hold on to all of those times tightly. We will continue to keep all of you in our thoughts and prayers. We love you. Love, Erica & Family XOXOXO
Comment Share
Share via: 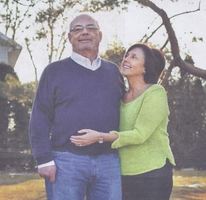