To share your memory on the wall of Patricia Miller, sign in using one of the following options:

Mrs. Miller’s friends would describe her as devoted and dependable. Her sons would add brave and daring, and they would know — they lived with t... Read More
Patricia Miller — nurse, teacher and tireless hockey mom — died Tuesday. She was 83.

Mrs. Miller’s friends would describe her as devoted and dependable. Her sons would add brave and daring, and they would know — they lived with the Iowan she brought home to Michigan.

John Miller crashed into her life in the full bloom of irascibility. He was handicapped, he had few pennies to count, his ears flapped like spinnakers, and he insisted on one slice of buttered toast at breakfast, not two. He regarded the telephone as a pestilence, and he always thought small talk could best be expressed with silence.

Mrs. Miller chose John Miller because she had imagination. A lot of imagination. She saw possibilities, and together they found happiness, contentment, and all the pleasures and frustrations of the ordinary. Unruly kids, countless ice rinks, problems at work, triumphs at work, poker nights, PTA meetings, fishing follies, and yet another long drive to yet another distant rink. With a stop at Emil’s for a burger on the way home.

Mrs. Miller was the proud daughter of John and Evelyn Nelson. Their home was cramped — four sisters bedded like canned sardines, while brother Jack wondered why there were no useful brothers among all those spirited sisters. A volatile situation, which Mrs. Nelson calmed by baking delicious pies.

Mrs. Miller left that nest for nursing, and she flew. But there was a hitch during her studies. It happened at a picnic. Interns blew in like a storm front, Mrs. Miller met Dr. Miller, they started dating, and then she — in a move that is still scandalous and disgraceful — seduced him. He, instantly over the moon, melted into uncharacteristic agreeableness. After the kiss they married and settled in Port Huron. Where he installed a skeet shooter.

The neighbors were wary, but not one was ever winged. Instead, Dr. and Mrs. Miller worked hard, very hard, to comfort and care for their patients. They also raised the Purple Martin house in spring, laughed with friends on summer nights by the lake, admired the magic of forests in fall, and warmed winter days with family banter. They turned ordinary into grace.

Mrs. Miller’s family extends its warmest embrace to her larger family — her student nurses at St. Clair County Community College. Thank you, thank you, thank you! You sent her over the moon, and your wonderful work is her legacy.

We also wish to thank her caregivers at Lakeshore Woods, Seasons Hospice and Blue Water Lodge.

We encourage you to share your most beloved memories of Patricia here, so that the family and other loved ones can always see it. You can upload cherished photographs, or share your favorite stories, and can even comment on those shared by others.

Posted Sep 15, 2019 at 12:23am
I always enjoyed her visits to San Diego, we would have long talks and she loved talking about her family!
Comment Share
Share via:
JH

Posted Sep 14, 2019 at 06:53am
My sincerest condolences to the family and friends of Patricia, she will be dearly missed by us all.

Posted Sep 13, 2019 at 10:33am
Pat Miller is the mother of Greg, the one guy who has known me my whole life. She was a woman of extraordinary patience, which we tested regularly. Whether it was messing about in boats, playing shinny on a frozen Lake Huron, or paddling around on ice bergs through frigid open water; Pat watched it all from her front room. She was a great teacher. When something did go badly, she would look at us and say; “You boys better get that fixed up before your father gets home.” Reflecting back, I realize that we did some very poor thinking getting into trouble; but we did some brilliant thinking getting things fixed up before “Doc” Miller got home. Rest in peace Patricia, Lord knows you have earned it. We pray you’re still looking out for us.
Comment Share
Share via:
KG

Posted Sep 12, 2019 at 03:49pm
I met Pat some years ago as she traveled to San Diego yearly to enjoy our lovely winters staying with her friend Fred Harris. She was always a delight full of stories. She will be sadly missed. My condolences. Kelley J. Gebbie
Comment Share
Share via:

Posted Sep 12, 2019 at 06:02am
We at Dunkin are sorry to hear of Mrs. Pat's passing, We were blessed to have her as a regular guest and friend.
Comment Share
Share via: 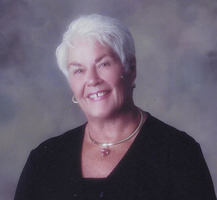