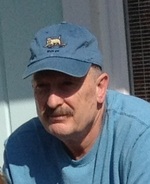 He was born in Sarnia, Ontario on October 31, 1950, the son of Max and Norma Dalrymple.

Robert graduated from Port Huron High School in 1968. He then received his Associate Degree in Arts & Business from St. Clair Community College. In 1973, he graduated from Wayne State University with his Bachelor of Science. He worked at Mueller Brass for 15 years and worked for the US Postal Service. Robert was an enthusiastic do-it-your-selfer and loved helping other people with anything he could, ranging from fixing computer problems to shoveling neighbors’ snow in the wintertime. His passion for music led him to learn the guitar in his youth and later play in a local band with friends. Later in life, he picked up golfing, which became one of his favorite ways to spend time with his sons.

His most important roles, those of father and grandfather, were of incredible importance to him. As a father to Jeremy and Jeffrey, he set the example of how to tirelessly love their mother, wives, and children. He instilled core values like integrity, accountability, and treating others with respect. As a grandfather, his focus shifted from raising his sons to unconditionally loving his grandchildren. The way his eyes lit up when the grandkids came through the door will never be forgotten.

In lieu of flowers, memorial contributions in Robert’s name to the American Cancer Society are preferred.