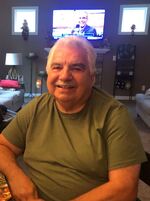 Robert Louis Valdez, 70, of Fort Gratiot Township, passed away Friday, January 1, 2021 after suffering complications from COVID 19. At the end, he was surrounded by family and went to be with God peacefully. Robert married Marlene Valdez (Snider) on June 28, 1969. They were married for more than 51 years.

Robert enjoyed life and could do almost anything! He was often found fixing his old truck, playing with his dog, Bailey, and working on things around the house or his children’s houses! He could do anything from electrical to plumbing to vehicle repair. Whenever anyone needed something, he was there. He enjoyed camping, watching football and spending time with his family. Robert spent his early years in life in the National Guard and working for Huron Cable for 32 years (never missing a day) before becoming a truck driver.

Robert was preceded in death by his parents, Dorthy Urie and Louis Valdez along with his two brothers, John and Joseph Urie and two grandchildren. He is survived by his wife, Marlene Valdez, their three children, Jennifer Valdez (Chris), Kimberly Woodard (Mike) and Robert Valdez (Amy), 7 grandchildren, two sisters, Victoria and Mildred Urie and a brother, Dennis Urie along with many nieces, nephews and great nieces and nephews. He will be greatly missed by many.

A private memorial service will be held at a later date. Cremation arrangements were provided by Smith Family Funeral Home of Port Huron.

Memorials are suggested to “Wishes of the family”.