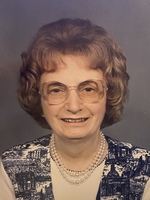 She was born in Pointe Edward, Ontario on September 22, 1932, daughter of the late Joseph and Annastacia (Kuzio) Salak.

Stella graduated from St. Patrick High School in Sarnia and moved to Port Huron in the early 1950's where she became a naturalized citizen in 1957. She worked for Acheson Colloids Company before working in the banking industry at local banks as a secretary for 40 years before her retirement in 1999. She was a parishioner of St. Mary Catholic Church in Port Huron.

The family extends a special thank you to the staff including Janine, Nichole, and Christine at Marwood for the wonderful care provided for Stella.

Memorials are suggested to the activities department at Marwood Manor.