To share your memory on the wall of William Carlisle, sign in using one of the following options:

He was born in Mt. Vernon, Illinois on September 19, 1947, son of the late Albert and Marion (Farr) Carlisle.

He was born in Mt. Vernon, Illinois on September 19, 1947, son of the late Albert and Marion (Farr) Carlisle.

He married Pamela Schultz in Port Huron on September 19,1970.

Bill attended Port Huron Area Schools and graduated from Port Huron Northern in 1966. After graduation he joined the United States Navy and served from 1967-1970. Bill attended Kendall School of Design and became an interior designer. He worked at independent Floor Covering from 1975-1984 and created the design studio in the store. In 1984 Bill became the owner of Fountains Custom Interiors (FCI) and was the current owner presently.

Bill's sons and grandsons will be pallbearers.

Memorials are suggested to St. Jude Children's Research Hospital or to the donor's choice of charities.

To send flowers to the family or plant a tree in memory of William Farr Carlisle, please visit our Heartfelt Sympathies Store.

Receive notifications about information and event scheduling for William

There are no events scheduled. You can still show your support by sending flowers directly to the family, or planting a memorial tree in memory of William Farr Carlisle.
Visit the Heartfelt Sympathies Store

We encourage you to share your most beloved memories of William here, so that the family and other loved ones can always see it. You can upload cherished photographs, or share your favorite stories, and can even comment on those shared by others.

Memories we will never forget. All the Hockey games together. Family trips especially Yogi bear and animal safari parks in Canada. Boating times together, camping on the island. Summer gatherings, July 4th and Boat week celebrations. Such happy times together, they make us smile. Thank you for the memories.
To you Bill ......... A life well lived. RIP
Love, Gary, Bev Sadowy and Family
Comment Share
Share via:

Posted Dec 10, 2019 at 08:11pm
Bill is my cousin. We were all close as kids, as were our parents. We had great fun on the lake and beaches. His dad, myUncle A b had several cruisers. We were always together at Holiday time. We loved going to their house! On Christmas day! Goodbye cuz, rest easy. We'll all be together someday.
Comment Share
Share via: 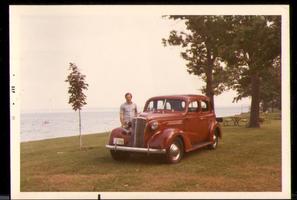