To share your memory on the wall of William Raymond, sign in using one of the following options:

He was born in Chatham, Ontario on September 9, 1949, son of the late William Eugene and Lillian (Miller) Raymond.

He was born in Chatham, Ontario on September 9, 1949, son of the late William Eugene and Lillian (Miller) Raymond.

Bill served his country with the United States Army in Korea from 1969 to 1972. He moved back to Canada in 1974 and married Laurie Barker. They moved to Germany in 1975 and he was active in the military service. He was active in the National Guard from July 1983 to January 1997. He loved fishing. Bill liked playing bingo, going to the casino, working in the workshop, and painting sculptures and ornaments. He retired in 2008 after many years as an automatic screw machine repairman.

He was preceded in death by his uncle Frederick Raymond.

The family honors the memory of William and invites you to visit and share memories on Monday, December 9, 2019, from 2:00 p.m. to 8:00 p.m. at Smith Family Funeral Home-Hancock Street. A funeral service will be held on Tuesday, December 10, 2019, at 11:00 a.m. with a visitation beginning at 10:00 a.m. Reverend Max Amstutz will officiate. Military honors will be conducted under the auspices of the St. Clair County Allied Veterans Honor Guard following the service.
Memorials are suggested to "Wishes of the Family."

To send flowers to the family or plant a tree in memory of William Eugene Raymond, please visit our Heartfelt Sympathies Store.

Receive notifications about information and event scheduling for William

We encourage you to share your most beloved memories of William here, so that the family and other loved ones can always see it. You can upload cherished photographs, or share your favorite stories, and can even comment on those shared by others.

Joy.Jackson, Your FCA Packaging family, and other have sent flowers to the family of William Eugene Raymond.
Show you care by sending flowers

Posted Dec 08, 2019 at 03:48pm
With our deepest sympathies for you and your family love and hugs from Joy, Stacy ,Stephanie and Gordon

Posted Dec 07, 2019 at 10:00pm
Our thoughts and prayers are with you and your family during this difficult time.

Posted Dec 07, 2019 at 06:16pm
I have many, many memories that I could share. However the most recent memory will always hold a place in my heart.
The last time Bill went to visit his Uncle Fred , he leaned over him and said " Remember the time we went fishing by the railroad track and I told you that you were like a big brother , like a father to me , and my best friend. You replied "yep" and we continued walking in silence.
I can only imagine what pleasant dreams Fred must have had that night.
Rest in Peace Bill
Comment Share
Share via:

Posted Dec 07, 2019 at 11:34am
I am so sorry to hear about Bill. You and and your family are in my thoughts and prayers. Sending lots of Hugs
Comment Share
Share via:
LF 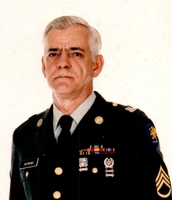